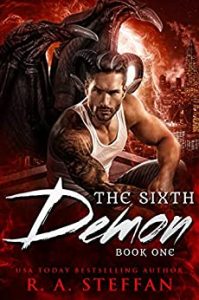 An angel locked out of Heaven. A demon on the hunt for an escaped soul. Watch out, because all Hell is about to break loose.

“You seem quite remarkably well informed about other realms,” Nigellus said. “Yet you are not Fae, and you most certainly aren’t a demon. I confess myself intrigued.”

Neveah crossed her arms. “See, now, if you’d caught me a year ago, I’d have been thrilled to have that conversation with you,” she told him. “But as things stand today, I’m a bit more concerned about the part where your people and the Fae are about to start trading metaphorical punches again, possibly flattening Earth in the process. I’m afraid the other subject might just end up being a distraction.”

“A fair point,” he said, giving nothing away.

She sighed in irritation. “So… maybe you’d like to explain why you decided to flambé the corpse of an unidentified Fae warrior before we could figure out exactly why it ended up in a human morgue in the first place?”

His expression grew calculating. “Not particularly, no.”

“You really are the most infuriating—” she began, only to cut herself off with a sharp exhalation. “Fine, here’s the deal, Nigellus of the Demon Council. Earth is the only home I’ve got left at this point, so I don’t intend to see it turned into a giant sheet of volcanic glass after you lot start tossing magical bombs around.”

Neveah’s people had once held a well-earned reputation for patience. Unfortunately, Neveah hadn’t been a particularly good spokesperson for angels, even before things had gone pear-shaped. Now, after a few thousand years kicking her heels among humans, she was even less inclined to put up with Nigellus’s particular brand of stonewalling.

She retained very few of the gifts she’d originally possessed, but the power to inspire adoration was one she could still use. It took more power than the resulting outpouring of love could replenish, but it was staggeringly effective in getting her what she needed, when she needed it.

Demons—immortal, ageless, and powerful though they were—had never been a match for Neveah’s race. While she hadn’t had cause to go head to head with one on this sort of battlefield before, she was confident that Nigellus would not be a match for her now.
The fate of three realms was at stake, and she wanted answers.

“You already know exactly how this Fae came to die on Hell’s doorstep,” she accused softly. Her power unfurled to its full extent, mantling around her like great wings, enveloping them both. “Tell me what’s happening, spymaster. Maybe I can help you put the genie back in its bottle, assuming it’s not already too late.”

Nigellus’ bourbon-colored eyes sharpened as her magnetic pull surrounded him. Hellfire sparked once more in their depths, stronger and brighter than before. She sensed his growing awareness of her gambit, as her aura demanded his immediate and reverent devotion. A human would’ve prostrated himself at her feet within the first two seconds. Nigellus fought the pull, his hands gripping the arms of his chair until the metal frame creaked in protest.

She wondered if anyone had ever turned his own mind games back on him before. Her race had fought his before humanity had even been a glimmer in evolution’s eye, but they didn’t do battle like this. Her fellows would have considered such manipulation beneath them—yet another unwritten rule that held no meaning for her now.

Nigellus rose from the chair, and she rose to match him.

“Tell me,” she commanded, wrapping him up in her aura of love and pulling him closer to her.

He stumbled forward—another step, and another. Only when he was an arm’s length away did she read the emotion behind his red-tinged eyes, and stop to wonder if perhaps there was another reason her people had never dallied with demons in quite this way.

Nigellus’ hellish gaze didn’t burn with uncontrollable adoration for her.

Instead, it burned with lust.

Oops, she thought, an instant before a long-fingered hand wrapped around her throat, walking her backward until her shoulders hit the nearest wall with a dull thud.