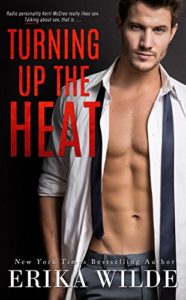 Kerri knows firsthand that you can hide a lot behind a microphone. Although she’s earned a reputation for discussing every aspect of sex on her show, she’s never had to back it up . . . until a sexy mystery caller proves to be even more irresistible in person.

“This is Kerri McCree and you’re listening to Heat Waves on WTLK,” she announced into her microphone as the last bit of jazz faded into the background. “We’ve heard some fascinating comments on what men find irresistible about women. I know tonight’s discussion has certainly enlightened me, but there’s more to come so let’s get back to business. If you listen to Heat Waves on a regular basis, then you already know my next caller, who’s become something of a special guest on my show.”

She pressed the button for line three, putting her fantasy man on the air. “Hello, Ian. How are you tonight?”

She laughed as he echoed her current sentiment while she sat in her warm, stuffy booth. “Aren’t we all? Is it the heat wave that has you so hot, or something else?” she dared.

“The heat and humidity started it, but I’m in an air-conditioned room so I can’t say that my rise in temperature is all weather-related.”

She didn’t miss the insinuation behind his words, or the frisson of immediate awareness that shot through her. “Sounds like maybe a cold shower might be in order.”

“Umm, already tried that.” A mischievous note laced his low, mellow baritone. “It was only a temporary relief.”

Oh, he was very bad. And very, very good. “I’m glad the heat didn’t keep you from calling. Inquiring minds want to know…what’s the first thing that you notice about a woman, and what holds your attention beyond that first glance?”

“Intelligence and a sense of humor gets my initial attention,” he said thoughtfully. “I’ve discovered lately that laughter is a great tension-reliever.”

“So is good sex.” As soon as the words left Kerri’s mouth and traveled miles across the airwaves, she dropped her head into her hands and shook it—hard. She wouldn’t know good sex if it snuck up behind her and bit her on the butt, not that her listening audience needed to know that. And she hadn’t slept with a guy in so long she could almost requalify as a virgin. Amazing the flaws and inexperience she could conceal being sequestered away in a private booth with only a microphone to link her to the outside world.

“I like the way you think.” She heard a lazy grin in his voice, felt the vibrations curl through her belly. “Hey, we might have just discovered the ultimate relaxation technique. Can you imagine what laughter and sex together could do for a person’s stress level?”

All she could imagine at the moment was sex with him and subduing her own spiraling need and deep ache, and knew she had a long, restless night ahead of her. “How about we save that topic for another show?”

“Fair enough. Let’s see…” he continued, his voice a low rumble of sound that found and touched all those secret places within her. “I’m also attracted to a woman’s mouth. Soft, glossy lips made for long, slow, deep kisses, and sexy smiles that make me feel like I’m the only one she desires…”

Unconsciously, her straight teeth tugged on her bottom lip, and she tasted the remnants of the pale-pink, cotton-candy-flavored gloss she wore. Sweet. Slick. Silky. Liquid heat settled low as her mind conjured images of him nibbling off the sugared taste, his tongue sliding across her parted lips, then delving into the heated depths of her mouth in an all-consuming, electrifying kiss. To her mortification, a small noise, much like a moan, escaped her throat before she could stop it.

Her face flushed to the tips of her ears. One glance at Carly in the booth next to hers and her friend’s comical expression and she knew that way too many people had been privy to that very telltale sound.

“Hot night, dry throat.” The excuse was a paltry one, but served its purpose, and she followed it up with a long gulp of her water.