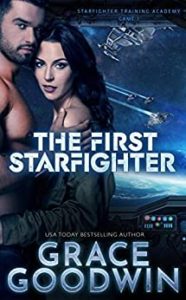 Starfighter Training Academy. It was supposed to be just a game. So why is the smoking hot alien she “built” standing at her door looking at her like he wants to PLAY?

I’d been following Jamie Miller’s progress for weeks. Months. Ever since I received word from training academy officials that I’d been chosen by an Earth recruit in the new Elite Starfighter otherworlds virtual battle program. Then I became obsessed.

Based on her stunned expression, I was not the only one suffering the shock of being chosen, of realizing our bonding was finally real. Standing before her was much more intense than interacting with her in the training program. She had been nothing but a possibility, a digital fantasy. Now I could see her, feel her. Touch her.

My first glimpse… she was everything I’d imagined. And even more perfect.

“Excuse me? I’m what?” She lifted her hand and rubbed both of her eyes. Blinked. Looked at me again. “You’re still here. Why are you still here?”

“I am not leaving. I must speak with you, Jamie.”

She stared, her gaze disoriented and confused. I fought back a smile. She was more beautiful in person. She looked… flummoxed. The feeling was mutual.

The new training simulations had been distributed to Earth and multiple other worlds months ago, with no results. Until now. The few surviving Starfighters on Velerion had been fighting and struggling to defend my home world. And they were faltering. Dying. Being picked off one by one as exhaustion or the relentless attacks of Queen Raya’s Scythe fighters wore them down. The truth was, we were losing the war.

We needed new Elite Starfighters. Without them, our entire civilization, our planet would fall to the evil queen’s invaders and her Dark Fleet allies. But the Dark Fleet would not stop at Velerion. There were other worlds ripe for the taking. Many with far fewer defenses. Including Earth.

“This can’t be real.” Reaching up with both hands, she brushed the hair out of her face and tucked the long strands back behind her ears. After all the time I’d watched her in the simulations, I was finally seeing the real female. She looked sleep rumpled and sexy. I wanted to bend down, grab her, and haul her to me, crush her mouth with my lips. Make her body mine. But I dared not. I was on very treacherous ground. The law was clear. Even though she’d completed the training, she had to come with me of her own free will. I was not without honor. No matter how badly my people needed her help, I would not force her to return with me to Velerion to save the planet.

“I am real.” She was an Elite Starfighter now. She would choose to help. We needed Jamie Miller. We needed a thousand more just like her. Male. Female. Androgynous. Human. Centaurian. Andromedan. I didn’t care where they came from as long as they had the skills to protect Velerion.

The fact that Jamie had chosen me in the program was a gift. I’d gotten hard the first time I’d received word of our match, when I’d seen her avatar appear on my data screen. Her curves. Her dark hair. Seeing her stand before me now was a shock to my system. I’d heard her voice in the training simulations. Seen her smile. Heard her sass. Ached to touch her. In fact, I had thought of her, been consumed with my need for her from the first moment the training simulation had connected us. I had to hope she felt the same in return, but the way she was acting, I couldn’t be sure.

The reality of her was a shock to my system, lust and physical need both urges I was not prepared to feel pulsing through every cell as she stood before me. So close I could smell her soft skin, see the sleek shine of her hair. My fingers twitched at my sides as I fought to remain calm. She was mine now. She’d finished training and taken her vow to be mine. She had accepted me. We were a bonded pair. My body belonged to her as hers belonged to me.

Yet she stared at me as if I was a stranger. As if we had not spent hundreds of hours together in training simulators. True, we’d been on different worlds, but I knew her voice. Knew the way she moved. Knew her.

Surely she was familiar with me as well? “Are you going to invite me in?”

“No. Not that it matters since you’re already inside my head.” She reached up to touch my cheek but stopped before making contact. I nearly groaned in disappointment.

I grabbed her hand and pressed her palm to my cheek. “I am real, Jamie. I have come a very long way. Please, Jamie, may I come inside and speak with you?”