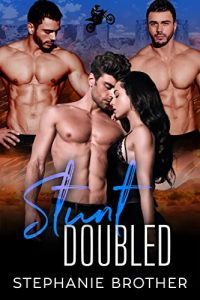 When I land a job on a movie set, I find out leading man Aiden Hunt is as arrogant as he is handsome. I also learn that he’s my stepbrother, we hate each other on sight. And I have to move in with him, his twin brother, and their best friend. Is there any chance for the four of us to get a Hollywood-style happy ending?

As Aiden Hunt stalked toward me, I suddenly remembered that he was a genuine movie star. He’d been a thorn in my side since the day we met. With all our bickering, I’d somehow forgotten that he really was an honest-to-god celebrity.

He looked it, as he closed in on me. The dark eyes with the predatory glint in them. The short beard and full lips. The ripples of muscle visible through his open shirt. This was a powerful man used to getting what he wanted.

And what he wanted right now was me. Or, at least, that’s what his character wanted. I still wasn’t sure how I’d ended up as a stand-in for a sex scene rehearsal, but it was too late to ponder why because Aiden was right in front of me. He was close. Too close. I could feel the heat from his skin, and the sheer size of him made me feel tiny.

He put his arm around my back and lowered me to the bed.

The mattress was hard—but not as hard as Aiden’s flat stomach. He hovered over me, desire in his eyes. Wait, in his eyes? Or in his character’s?

How much of this was acting?

When he touched me, when his long fingers trailed across my shoulder, tugging my shirt down, it didn’t feel like acting. It felt good. But that was wrong. I’d hated Aiden before I ever laid eyes on him. I’d never wanted to meet the stepbrothers who stole my father away from me as a child. And now one of them was on top of me, undressing me with his eyes… and with his hands.

Aiden’s head dipped down, his teeth scraping across my bare shoulder. His other hand brushed over my stomach and moved up, cupping my breast through my shirt. My back arched and I moaned, unable to stop myself. He might be acting, but I wasn’t.

His talented lips skated up my neck, nibbling under my ear. I could hear him swallow hard. His warm breath danced across my skin. “Are you ready for this, princess?”

Before, when he called me that, I’d bristled. But now, for the first time, I wondered if perhaps he didn’t mean it as an insult. It sounded almost like he cared. Then again, he was an actor, and he was damn good at what he did.

My nipples hardened under his touch, and then his hand slid down my body. He palmed my ass, and I couldn’t help wrapping my legs around him. His large hand gripped my thigh as he ground the heat between his legs against me. I moaned again, and he chuckled softly. “I’ll take that as a yes.”

The man was an actor, yes. But the way he was touching me? The way he used his mouth and his hands? That spoke of a man with experience. A man with knowledge. A man with skills he’d learned not on the stage—but in the bedroom.

Everything else faded away as I ran my fingers through his short hair. Our history. The lights. The others in the room. All of that disappeared as I pulled his head toward mine.

When our lips met, we were the only two people in the world. His mouth ravished mine and I didn’t want it to end. Ever.