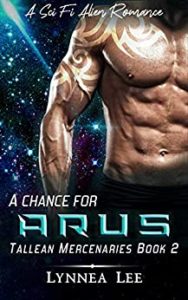 Mia knows it’s dangerous to keep seeing the sexy alien mercenary. Triggering his mating bond means he’d steal her away and keep her locked up on his ship. But she can’t get Arus and the things he did to her body out of her head. Arus isn’t the type to settle down, but as one night turns into two, he realizes that it’s too late…

Mia resisted the urge to cover her body. While she considered herself a sexually liberated woman, she was not used to being nude in a public space. She observed that while most of the bath’s patrons were Tallean, there were still quite a few humans scattered about. More than she had expected.
She recognized the lady who helped her get set up at the housing office and waved. The blonde waved back cheerfully. She was relaxing in a tub with another woman, a brunette. Four Talleans were crammed in with them, one of them was female. The female Tallean rested her head on the brunette’s shoulder, her eyes closed, a blissful smile on her face. They looked like a happy couple.
The males, who were all paying attention to the blonde, turned to see who she was waving to. They appraised Sala and Mia, smiling broadly to display their sharp fangs. They looked almost predatory. Self-conscious, Mia sucked in her belly a little tighter.
She was glad to see other Earth women here. Mia felt better knowing that others had taken to the new culture. It meant that she would not be alone. Others had paved the way already.
“The males aren’t here yet,” Sala noted. “Let’s take that small private tub over in the corner. The smaller the tub, the less likely males will try to invite themselves in. With the attention you are garnering, we may still have to tell a few males that the extra spots are taken.”
Mia looked around and realized Sala was correct. Quite a few eyes were riveted on her. She tamped down the compulsion to cover her body again.
“Do men, I mean males, usually do that? Invite themselves into a bath?” Mia asked.
“It happens,” her friend replied nonchalantly. “If we take one of the bigger tubs, it’ll happen for sure. The bigger tubs are meant for sharing, and if two females are alone in the tub, it’s usually an invitation for others to join them.”
“That’s good to know.”
They slipped into the hot bath. Mia sighed. She let her body relax and closed her eyes, enjoying the massage from the jets. She hadn’t been in a hot steamy bath since Earth. The cleansing unit in the dorms just wasn’t the same.
Even with her eyes closed, Mia felt the moment Arus and Vore entered the room. Instinctively, she sat up a little taller and turned her head towards the door. The two impressively built males were walking towards their tub. And oh, wow! Arus was even better naked than she had imagined. Fantasy paled in the face of reality.
“Mmm,” Sala hummed in appreciation, her eyes riveted on Vore. “He definitely keeps himself in shape. Guess it’s a part of the job.”
Talleans males tended towards being muscular naturally. The two males walking their way were considerably above average. Everything about Arus was huge. Even his eight gleaming claws, connected to massive feet and thick legs, were larger than others she’d seen.
When the pair had first sauntered into the Daily Dose, Sala had explained that visiting mercenaries were the perfect males for no strings attached entertainment. They lived a life that kept them remarkably fit, never ran out of interesting stories, and were eager to please in the bedroom. Or any room at all, for that matter. And most importantly, according to Sala, they didn’t expect a commitment and didn’t get attached. Most females were not content to live on a ship, and most mercs were not willing to give up their jobs.
Sala moved to the other side of the bath as Arus slipped into the water beside her. Even though she was already immersed in hot water, Mia felt her body temperature rise. It felt as though she could boil the bathwater with the heat coursing through her body.
He pressed his legs right up against hers. The contact was electrifying.
She tilted her head and gave him a small smile, not wanting to seem too eager.
“Hi.” That came out a little too breathily.
“Mia.” Just the short sound of her name in that low, rumbly voice made her belly do somersaults.

This site is a participant in the Amazon Services LLC Associates Program, an affiliate advertising program designed to provide a means for sites to earn advertising fees by advertising and linking to amazon.com.